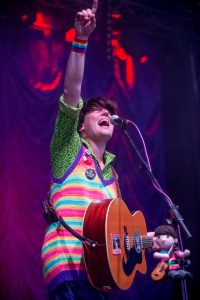 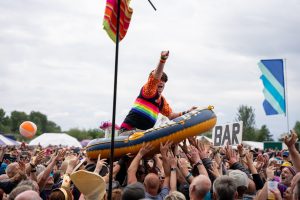 As the charismatic frontman of the UK’s hardest-working comedy band, ‘The Bar-Steward Sons of Val Doonican’, Scott Doonican is a debonair and theatrical performer with superb hair and more style than you could shake a Milan catwalk at.

As a solo performer, Scott’s ‘Bar-Steward Unplugged’ shows are every bit as funny, dynamic and engaging as those with his band, and he is equally at ease in front of large festival crowds, as he would be in a theatre or down the pub. This is where Scott Doonican the story-teller, entertainer and showman, gets the opportunity to take the band’s extensive back-catalogue of comic-songs and perform them, stripped-back, on just his battered ‘Workhorse’ acoustic guitar or his little banjulele in his hand. Here, the Doonicans’ side-splitting song-smithery, comes to the fore, often accompanied by with an abundance of cracking yarns, giving a charming insight to the inspiration behind them.

Into his third decade of bringing smiles and belly-laughs to audiences across the UK; from Barnsley to Barnstaple, from Glasgow to Glastonbury Festival, Scott continues to wow audiences with a fine selection of The Bar-Steward Sons’ greatest hits, including the likes of “The Lady In Greggs”, “How Deep Is Your Glove?”, “Nandos”, “Paint ’em Back”, “Walking In Manpiss” and “If I Could Punch A Face… It’d Be Justin Bieber’s”.​

With over 1100 shows under his belt to date, Scott Doonican is driven by the desire to leave his audiences with a big grin on their faces. He subscribes to the same wise words of his spiritual father, Val Doonican, that, “When you entertain the public, it’s no good just having good music or singing, you must also have entertainment value, so people will go home having a good time”.​

So, can you trust him? To be silly, yes. To behave, hell no. Like a bus conductor standing in front of an orchestra with a spoon in one hand and a pint in the other, Scott Doonican is quite clearly here for a good time, not a long time.