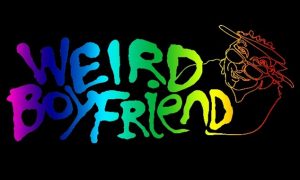 We are always looking out for original music and something a bit different to bring to the festival and are thrilled to welcome Weird Boyfriend – great songs with hooks!

Listen to Weird Boyfriend on Spotify, Apple Music, Amazon, Sound Cloud. Formed in 2018. Recorded 6 tracks at Wormwood Studios, the track ‘Live Now’ was played on BBC Introducing CWR. Previously the band was called the Deserters and gigged from the 80’s in the UK and France. Venues included the Greyhound, the Rock Garden, The Embassy Club, The Opera Night, Elisée Montmartre, Mimi La Sardine and the Rock Store. The band has played festivals including the Fete de l’Humanité and more recently the Hook Norton Beer Festival. Early recordings on ‘Class of 81’ produced by Bram Tchaikovsky (the Motors) and 3 tracks produced by Bob Lamb (UB40, Duran Duran).

Influences are wide and varied – from Bowie, Dylan, Led Zeppelin, The The, Pre-Fab Sprout, Fleetwood Mac, Talk Talk – and the list goes on! The band’s music has been compared to the Doors…